When I was a kid, maybe around 8, I learned that the flat-top mountain I’d see in the distance while our family drove to Pearlridge or Makakilo to visit my cousins was actual the tallest peak on O‘ahu.

It was called Mount Ka‘ala, and it rose 4,026 feet above sea level.

And I wanted to climb it.

It’s been on my to-hike list since then — that’s more than 30 years! — and I’ve never even been close to climbing it.

Once, a group of friends talked about it, but nothing came of it. Another time, my husband tried to organize a hike to the summit, but we opted to do another trail instead.

Lucky for me, third time’s a charm.

It turned out that our plans to hike into Waimanu Valley on the Big Island this weekend had to be canceled due to inclement weather approaching. We cancelled our flights — don’t worry, we’ll find a reason to rebook soon! — and decided to stay on O‘ahu, where it would be drier.

So in place of hiking into Waimanu, my husband decided we would do the hardest hike he could think of: Mount Ka‘ala.

I was partly excited, partly nervous. Sure, I’ve been hiking all year — all of my life, in fact — but I wasn’t doing anything near the training I figured was needed for such a steep, uphill climb to the tallest peak on O‘ahu.

“Don’t worry,” my husband kept telling me. “You’ll be fine.”

Oh, I wasn’t so sure. It’s not like my weekly treks to the Makapu‘u Lighthouse were enough to get me to the top of Ka‘ala.

Still, this was my chance — and it might not come around again anytime soon.

So we packed up the night before with plans to get up early and hit the trail before anyone else. Though paved, the first mile is tougher than you’d think. The end (the summit) is in sight — and in the clouds.

We got up at 5 a.m. and left the house about 20 minutes later. It’s a haul from town to Wai‘anae on O‘ahu’s western coastline and this area gets brutally hot by mid-morning, so we wanted to get an early start.

I brought 3 liters of water, a couple of granola bars, a Ziploc of honey roasted peanuts, a multitool and Aleve. Just the essentials!

As you get into Wai‘anae town, you turn right onto Wai‘anae Valley Road and follow it pretty much to the end, staying to the left at the turnabout. You’ll come to the gate above (top photo) with a dirt lot to the left. Park here, but don’t keep any valuables in your vehicle.

There’s a hunter check-in that, apparently, hikers sign, too. We didn’t bother.

So to get familiarized, we are basically at 450 feet elevation. That means we’d have to climb around 3,500 feet straight up to the summit. No switchbacks, either. Just uphill.

And it starts right at this gate.

This will be the longest half-hour walk of your life.

It felt like the road wasn’t going to end. It’s about a mile or so on this hot, paved road that’s got a brutally unforgiving incline to it. You’ll want to give up before you even start. Don’t. The rest of the trail, while challenging, will be manageable. Here’s the end of the road — but the beginning of the hike. On the left will be a shelter. Stay right.

The pavement ends at Wai‘anae Well II (above), where the actual trailhead starts. You’ll walk through more coffee and macadamia nut trees before you reach a clearing with a shelter. This is already about 1,600 feet above sea level, so much of the climb is done on paved ground. The rest of it, though, will be a straight shot to the summit. Your calves will be burning.

You have options here. You can continue up the valley to Three Poles, at 2,800 feet, and turn around. Or you can go right and continue the trail toward Ka‘ala, going left at a junction that takes you meandering through the valley via Kūmaipō, an ancient Hawaiian trail. You’ll ascend to about 2,200 feet. Or you can summit Kawiwi from here by veering to the left.

I was more interested in Ka‘ala and checking out the bog environment at the summit. (My husband, who has climbed Ka‘ala three times, told me about the strange bog on the top, much like the one we walked through along the Alaka‘i Swamp Trail on Kaua‘i.) Follow the trail markers. There are a lot of them. Walking through a grove of strawberry guava trees. This area has several terraces once used for growing taro. And you can tell by all the ti plants there must have been a community here at one time. The trail goes through a gully to a partially open ridge. It’s steeper than it looks. We strapped on these Hike Spikes Hawai‘i minispikes ($50), perfect for hikes like this. They grip where you want grip and provide the kind of traction you need to make it through muddy, slippery or steep terrain.

The basic idea is that you’re going up and to the right. And it’s a relentless up, too. You’ll walk through a broad gully and through groves of strawberry guava trees and ti plants and wonder when you’ll hit the ridge. You will — it just takes some time.

We used minispikes from Hike Spikes Hawai‘i — you can find them at McCully Bicycle & Sporting Goods, Rainbow’s End Snack Shop at Mānoa Falls and Uyeda Shoe Store — to get through this steeper, slipperier terrain. That grip really helped.

We hiked along this valley floor — uphill, don’t forget — for about an hour before we emerged onto a ridge with views of Wai‘anae. Here, we could see native koa and ‘ōhiʻa trees and caught glimpses of ‘elepai‘o and ‘apapane. This is just one of several sections that require ropes to get up. The trade-off, though, is this: stunning panoramic views of the West Side. When you get to the ridgeline, you’ll see this predator fence. Follow it toward the summit. You’ll come to this dry, open area — a great place to rest before the rest of the ascent. And you’ll need the breather! A look back at the mountain range behind us.

Once you get on the ridgeline, the trail becomes a lot more rugged and challenging. Mostly because you can see your goal — and it’s not getting any closer.

The trail narrows a bit, with steep sections that require ropes or cables. Test them before you rely on them. And watch your footing and balance. (This is especially important on the way down.) And the blackberry bushes along the trail will scratch up your legs and arms, so be careful about that, too. (We wore pants and gloves.)

But there’s also a lot to see, so don’t just focus on the hard trail in front of you. You can see native shrubs like ‘a‘ali‘i and maile, ‘ōhiʻa ʻāhihi, and beautiful koa and sandalwood trees. And there’s a lot of olomea here, too, with its shiny leaves with serrated edges where you might find an endangered land snail. (We didn’t see any.) Looking back at one of the most difficult sections of the hike.

There’s this one section, though, that almost got the best of me.

It’s on the last big push to the summit. This group of boulders, must’ve been at least 15 feet high, with hardly any footings. I just couldn’t get my legs up high enough. I tried twice and failed. I had to step away, feeling very defeated.

Luckily, we heard chattering behind us. A group of four hikers were coming up on us — playing loud music from an iPhone, which was super annoying — so we waited for them to pass.

Though I wasn’t too thrilled with having to hear urban hip-hop in a beautiful and natural setting, with chirping birds and the fluttering of ‘olapa leaves, I was happy to watch how the four negotiated this large boulder section.

It wasn’t easy, but with the help of my husband, who literally served as a foot hole for me at one point, I made it up this section, scarred shins and all. Entering the Ka‘ala Natural Area Reserve, marked by this sign. Those ‘olapa trees, their leaves fluttering in the wind.

The start of the boardwalk through the bog. Walking through the bog at the summit — my favorite part of the hike.

In about three hours, we were at the summit, walking along a boardwalk through this strange, wet bog world with koli‘i (an unusual native Lobelia), pūʻahanui (a relative of the hydrangea) and other native plants. It’s such a gorgeous place, so tranquil and intimate.

It’s really the best part of the hike.

The end — I hate to say this — is a bit anticlimactic. When you emerge from the bog, you’ll be greeted with this: an FAA radar installation that just looks so out-of-place here. A closer look at the station. You’re not supposed to walk around the perimeter of the fence, but we did — and a lot of hikers do — to get views of the North Shore. 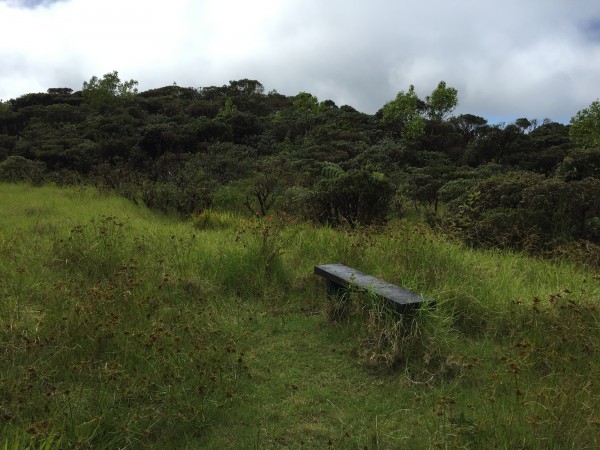 We ate beef jerky and honey roasted peanuts right on that bench — facing the bog, of course!

It was a pleasure walking through the bog again, as we headed back down the trail.

The trail is just as challenging going down as it is going up.

And the worse part? That one mile of pavement that leads to the car in the oppressive afternoon sun. I thought this last part would be easy. Not so much. It was just as hard going down this hill as it was going up!

VERDICT: It’s definitely a must-do on any hikers’ list. The views of the western coastline of O‘ahu are unbeatable — though it comes at a painful price. The walk through the bog — this is the only place on the island that has this type of environment — is the real payoff. I was surprised by how crowded the trail was — we ran into about two dozen people, mostly Mainlanders — despite the difficulty. Go early; the heat is killer. And bring gloves. Oh, bring gloves.

2
#CatTravels: My favorite Neighbor Island omiyage
It's not easy being a farmer