#FUUD: Via Gelato in Kaimuki Two years ago I met Melissa Bow, a former physical therapist who had come back home to Oahu after living in New York City to make gelato.

She wanted to do something she loved — and, incidentally, she loved gelato.

So she decided to start a gelato company, first selling hand-crafted gelato using local ingredients from a food truck with the goal of ultimately opening her own brick-and-mortar shop.

Well, back in March, she did just that, opening Via Gelato in the space vacated by the (beloved) Covenant Books and Coffee on 12th Avenue. The cute storefront on 12th Avenue in Kaimuki. And yes, it serves more than just gelato!

It’s hard to admit that I hadn’t been there when it opened. This was about the time I had gotten really sick, and I just wasn’t getting around — or eating — as much as I had wanted to. So I put this visit on hold.

Then the other day, I get a text from Melissa, asking if we could meet up for pedis.

Except as soon as I got to the nail salon, she texted and said she had to work at the shop. Which wasn’t actually a bad thing for me since it gave me an excuse to hang out with her and her gelato. I was surprised that on a Wednesday afternoon, just after lunch, the place was hopping. It wasn’t packed the way it often is at night — I see photos on Instagram all the time — but there was a steady stream of customers coming in, seeking out her unique flavors like green tea with Oreos (shown at the top), black cherry salted pecan brittle, tiramisu, coconut black sesame, and milk tea. The flavors available that day. She offers about a dozen flavors every day — and they change!

Here’s the affogato, an Italian favorite. It’s a scoop of vanilla gelato topped with a shot of hot espresso. 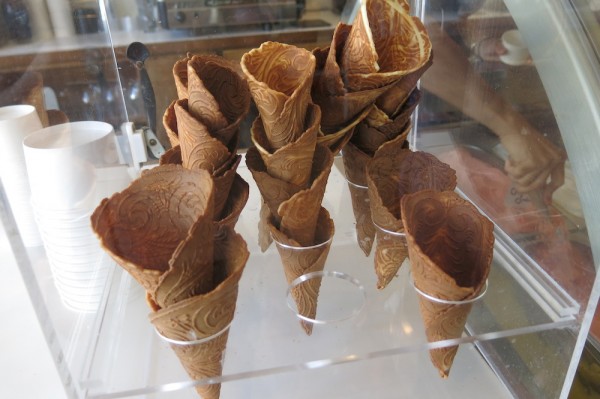 And here are Bow’s famous handmade waffles cones. The smell, alone, will make you want to buy gelato.

Bow raised about $8,000 on Indiegogo to help fund this new permanent space. It’s so big, though, she can’t just do gelato. So she offers espresso and sandwiches — and tons of space to spread out and kick back with friends.

I just wanted to eat gelato! And here’s one of my favorite combos: strawberry with Bow’s Fierce Chocolate.

So if you haven’t been, go. And if you’ve already been, go again. You can never eat too much gelato!

And here’s the second video we shot when she got her food truck.