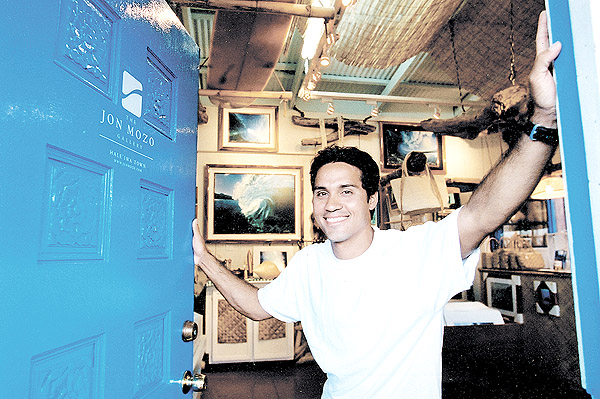 There are people you can meet just once and they change you somehow.

That’s how I felt when I first met Jon Mozo.

It was sometime in 2003. He was one of my then-boyfriend’s best friends, a guy he grew up with in Laie who was now an accomplished surf photographer.

He was warm and charismatic in a humble, quiet way. He was authentic and sincere, incredibly talented and generous. And you could never forget his infectious smile.

Immediately I knew, this guy was special. Different. Unlike anybody I had ever met before.

He died two years later, on Feb. 9, 2005, in a freak accident on the North Shore. On that afternoon, he was in the water at Pipeline, snapping photos of surfers. Conditions were mellow, waves weren’t especially big. And Mozo was a veteran waterman, just as comfortable in the ocean as on land. This shouldn’t have happened.

An off-duty lifeguard dived and found him underwater. He had head injures from hitting the reef but no pulse. He pronounced dead at Kahuku Hospital at age 33.

I was at work that morning at the now-defunct Honolulu Advertiser. The photo editor had heard on the police scanner that someone had drowned or died at Pipeline, likely a surfer but no one was sure.

I hadn’t, so I made a few calls, including one to my boyfriend who was a lifeguard in Waikiki. He started making calls, too, and we both found out, around the same time, that the person who died was Jon.

He was devastated. I couldn’t write the story. I immediately packed up my bag and notes and headed home.

Another reporter wrote the story. We drove to Laie to gather with the family.

We had just seen Jon earlier that month with his family, playing around on Jetskis at Kahana Bay. I remember saying to my boyfriend, “We gotta spend more time with this family.” I didn’t expect that “next time” to be at their home after Jon’s death.

His wife, Nikki, wrote a heart-wrenching blog about that day yesterday, exactly nine years after his tragic passing. It hurt to read it because I know how much they loved each other, how important Jon was to the family, and how much they all had to look forward to.

I met up with Nikki a few months later at Starbucks to talk and she told me how she was able to find peace in his passing.

Before he died, he had written a note that said, “If I die today, it’s fine. I’ve lived a good and full life. The ocean gives so much to me. The day will come, it will need to take and I’ll give. I have love for all of you, very much so. I’ll always be watching over.”

We all miss Jon, miss his smile, his passion for the ocean, the way he viewed the world through his lens. But like I told her then — and yesterday — I like thinking he’s up there watching over us. I couldn’t imagine anyone better for that job.

8
#CatTravels: Weekend in Upcountry Maui
Why I'm a fan of Valentine's Day